The Impact of Pixelle Mill Closure on the Label Industry 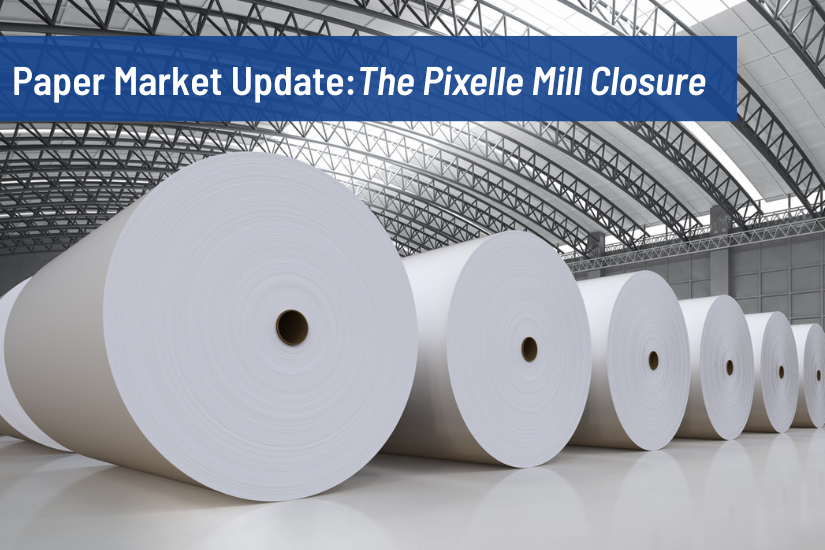 The recent announcement of the impending closure of the Pixelle specialty paper mill has sent shockwaves through the label industry. For years, Pixelle has been the go-to source for high-quality paper release liners in North America, used in a wide variety of applications, including pressure-sensitive labels.

Now, with the Pixelle mill set to close its doors, label printers and converters are scrambling to find alternatives. The sudden void left by Pixelle will undoubtedly have a major impact on the label industry, at least with far-reaching consequences.

Closure Announcement and The Reason Behind It

On September 20, 2022, the Pixelle mill announced that they would shut down their mill operations. The Androscoggin mill will officially shutter its doors in Q1 2023. The closure announcement was made two years after a catastrophic explosion in April 2020 that removed the part that made them able to produce their own pulp. Due to their inability to produce enough pulp, they had to purchase it from out-of-state suppliers at exorbitant prices, further increasing their operating costs. Without generating its own energy through its integration process, its operations were greatly affected as prices for pulp and energy remained high, especially throughout the pandemic. By not rebuilding the pulp digester, the mill ran on borrowed time. The mill’s current business model was no longer viable and could not sustain its operations, hence the closure announcement. This would mean leaving the market without a major supplier.

Impact of the Mill Closure on the Paper Industry

The impact on the paper industry is wide-ranging and has created a significant disruption in the supply chain. The closure has hit label manufacturers, who are struggling to survive. Due to the shortage, many manufacturers are switching to  synthetic release liners.

According to estimates, the North American market needs around half a million tons of release liners. The mill had the capacity to produce 230,000 tons of specialty labels and release papers annually. This is equivalent to more than 20% of all specialty labels and release paper produced in the market. The plant closure will significantly reduce supply, affecting manufacturers that use these products.

The market is now leaning toward polyethylene terephthalate (PET) liners as an effective alternative. Also, switching to linerless could be a viable option, which requires huge investments, such as the acquisition of new machinery, which is likely to be passed on to customers.

How Dot It is Adapting?

To maintain production levels and a superior quality product, Dot It is implementing the below creative solutions to minimize customer impact. These include:

How You Can Help?

We are encouraging all our clients to do the following to help alleviate raw material challenges.

What Does the Future Hold for the Labeling Industry?

With the impending close of Pixelle Mi, there is a lot of uncertainty as to what lies ahead of us. But one thing is sure, the paper industry and general economy will suffer a major blow. And as it seems, there could be.

The supply of paper release liners will sharply drop with the mill’s closure, which means a serious hunt for an alternative. This could lead to a shift in sourcing outside of North America, such as Asia, Europe, and South Africa.

However, offshore small mills may not be an adequate relief, given the current market demand for release liners. Further challenges may be occasioned by the logistical issues associated with imports as well as the additional capital investment.

PET Liners Will Dominate the Market

At the total closure of the Pixelle mill, the void will put pressure on release millers to seek reliable options. PET liners are a potential option, and it is expected that there will be a greater reliance on them in coming years, which may lead them to dominate the market.

As companies push for sustainability, the market is likely to become acquainted with linerless label products. The technology could see a spike as the companies try to make it a more popular option. As new printers with the capacity to work with the labels enter the market, it may be the beginning of linerless labels becoming the new norm.

← Previous Next →
Categories
Recent Posts
Does Your C-Store Need Grab and Go Labels?
The Impact of Pixelle Mill Closure on the Label Industry
Menu Labeling Requirements for Restaurants and C-Stores

You have a past due invoice. Please pay online from My Account

Our records indicate your account is on credit or aging hold.
Please contact us at ap@dotit.com or 800-642-3687.